Notes from a U of Oregon lecture on star formation ... not as good as Luisa's lecture notes but a good launching point ... http://abyss.uoregon.edu/~js/ast122/lectures/lec13.html

STUFF HERE PERTAINS TO SPECIFIC TARGET SELECTION. why we should do one region versus another, why some regions should be dropped. high-level stuff right here; links below go to stuff specific to each target.

The list of sources that Lori suggests we consider are here:

Let's collect information on literature references for each of these. Look in both ADS and SIMBAD for papers and previously known sources within about 30' 10' of these positions.

CONCLUSION OF VOTES: we should do BRC 27 AND BRC 34! but we can mention in the proposal something like "we have a few other targets that we can study instead or in addition to the targets discussed here, should the analysis go faster than anticipated."

STUFF BELOW THIS LINE IS MEAT/DRAFT TEXT FOR PROPOSAL ITSELF.

DOES ANYBODY HAVE ACCESS TO Ogura's 2010 "Triggered Star Formation associated with HII Regions" ADS says the full paper is not available. --Sartore 12:37, 6 March 2011 (PST)

Few issues in astronomy are more fundamental than understanding stellar processes. Learning how stars form has been, and will continue to be, the topic of vigorous investigations. Stars are born in nebulae, giant molecular clouds of gas and dust found in abundance within disk components of spiral galaxies. Star formation may be triggered in a molecular cloud that is already contracting by shock waves from a variety of sources; supernova explosion, ignition of a very hot star nearby, collision with another molecular cloud, or spiral arm density waves. A very large cloud typically contracts to form a number of individual stars (perhaps hundreds, or more). During the processes of accretion, self-gravitation, and differentiation, protostars are shielded within their nebula, leading to the characterization of nebulae as “stellar nurseries”. During these stages theoretical models predict that these protostars must be very luminous and look like cool red stars, however we have no method of observing them in visible wavelengths. The dust cocoon absorbs most of the visible radiation surrounding the protostar and the nebula itself obscures the protostar from our view. The energy from the protostar warms the dust, which then re-radiates the energy from the protostar as infrared radiation. Thus, protostars are detectable within their nebula at infrared wavelengths. Excess infrared signatures may indicate the existence of an accompanying accretion disk. Jets from hidden protostars may also announce the presence of the still hidden protostar.

Bright Rimmed Clouds (BRC’s) are clouds that have experienced compression due to an external ionization shock, which served to focus the neutral gas into compact globules (Migenesa et.al.(2008)). These clouds generally have a radius of less than 0.5 pc, with an average mass near (or exceeding) 100 solar masses. Attention has turned to BRC’s as potential loci for star formation; their “speck globules” and “cometary globules” presenting interesting sites for possible star formation. Whether external ionization shocks compress the neutral gas into compact globules or bright rims, the boundary between neutral gas and gas ionized by incident photons is thought to be rich in potential sites for star formation. Drawn from the lists of Sugitani, Fukui, and Ogura (1991), and Sugitani and Ogura (1994), Allen et.al.(2011) imaged 32 of the closest bright-rimmed clouds located at estimated distances d < 1.2 kpc, finding young stellar objects in 75% of the clouds they studied.

Using Spitzer Space Telescope Archival Data we propose to conduct further examinations of BRC 27 and BRC 34 to search for additional Young Stellar Objects. BRC 27 is located in the molecular cloud Canis Majoris R1. BRC 34 has a variety of features worthy of deeper examination; dark nebulae, molecular and IC clouds, emission stars, and IR sources. Allen et.al.(2011) found one Class I protostar in BRC 27 and 34. Far more Class II T-Tauri stars were found in those same BRC's. Beyond that, these two BRC’s have not been well studied. We have a few other targets that we can study instead, or in addition to, the targets discussed here if the analysis goes faster than anticipated. We would like to search for undiscovered Young Stellar Objects. We believe there are more YSO’s to find in these BRC’s using Spitzer Space Telescope archival data in a variety of wavelengths.

BRC 27: John (Likewise, this is what I have so far for the background on BRC27. Please let me know if this is the correct approach and if there is anything else I should be including. Thanks.)

BRC27 is a star forming region located in the molecular cloud CMa R1 and is considered a type “A” bright rimmed cloud because of the moderate curvature of its morphology. The source of the shock front that triggered star formation in this region is still uncertain (Gregorio-Hetem et al, 2009). In a survey of the Canis Major star forming region, 179 H-alpha-emission stars were identified by WIRAMIHARDJA et al. (1986) using UBV photographic photometry. Sugitani, Fukui & Ogura (1991) identified a star cluster associated with BRC27 in their catalog of bright-rimmed clouds with IRAS point sources and subsequent research by Sugitani, Tamura & Ogura (1995) showed elongation of the cluster members indicating that the star formation in BRC27 was a triggered event. Using J, H, KS photometry Soares and Bica (2002, 2003) determined the distance and age of the stars in BRC27 to be 1.2 kpc and 1.5 Myr. Their distance measurement was consistent with the findings of Shevchenko, et al. (1999) who placed the distance at 1.05±0.15 kpc. Recently Gregorio-Hetem et al (2009) did a wide-field X-ray study of the CMa OB1/R1 star forming regions in an attempt to find low mass young stars that may not have been detected using previous methods. In their analysis they identified 40 members near Z CMa and 60 members near GU CMa which are both in the vicinity of BRC27. As part of a survey of 44 bright rimmed clouds, Morgan et al (2008) used submillimeter SCUBA observations and archival data from near-IR and mid- to far-IR to identify a dense core in BRC27. Using BVIC photometry Chauhan et al (2009) compared the ages of stars inside and outside the rims of BRC. As a result, they identified four BRC including BRC27 that showed evidence of a radiation driven implosion (RDI). --Gibbs 21:26, 26 February 2011 (PST)

BRC 34: Marcella (This is my initial research. There is more to be done but I just wanted to make sure that I was on the right track. Sorry I don't know how to do a table yet and my image is missing. Can you put images on?).

Triggered star formation can often be found in areas called Bright-rimmed clouds (BRC). BRC exist at the edge of HII regions and are often produced by radiative-driven implosion (RDI). According to Morgan et al (2004) nearby massive stars shock the surrounding area to trigger star formation. The UV flux of nearby OB stars causes the BRC to collapse (Morgan 2004). Additionally, Morgan (2004) reports that recombination with the ionized boundary layer (IBL) allows the BRC to be seen at optical wavelengths. Sugitani et al 1991 (SFO91) classifies BRC based on their rim morphology: type A, B, and C with moderately curved, tightly curved, and cometary curved rims, respectively. W SFO91 classified BRC 34 as type A. e propose to examine young stellar objects (YSO) in BRC 34 with coordinates of 21 h 32 m 51.2s +38d08m43s and 0.75kpc (SFO91).

Previously identified stars within 10 arcminutes are listed below (SIMBAD).

Ogura et al (2002) using Hα grism spectroscopy and narrowband imaging found two Hα emission stars in BRC 34. These are identified in the table and image below. Number 1 has been confirmed in SIMBAD.

Morgan (2004) used archival data from IRA, NRAO/VLA Sky Survey (NVSS), Digitized Sky Survey (DSS) and the mid-course Space experiment (MSX) to characterize the IBL of BRC. No 20 cm emission was associated with the rim of BRC 34. Water maser emissions, indicative of YSOs, were not detected by Valdettaro et al (2005) at 22.2 GHz in BRC 34. They surmised that the negative results were due to the emission from the heated dust near the head of the BRC. This might also be indicative of low-mass star formation. Morgan et al (2007) studied BRC 34 by using Submillimeter Common User Array (SCUBA) data and supplemented their findings with NASA/IPAC Infrared Science Archive (IRAS at 12, 25, 60 and 100 μm) and 2 mm all sky survey (2MASS) archival data. A search of the 2 MASS catalog by Morgan (2007) found that BRC 34 did not have any T Tauri stars nor any class 1 protostellar candidates. They proposed that the lack of YSO might be due to the protostellar core being at the early stages of evolution. Morgan et al (2009) observed CO spectra of BRC 34. As a result of this and previous work (Morgan 2007 and Morgan 2004), Morgan eliminated BRC 34 as a good candidate for RDI suggesting that its evolution would not be affected by nearby OB stars. 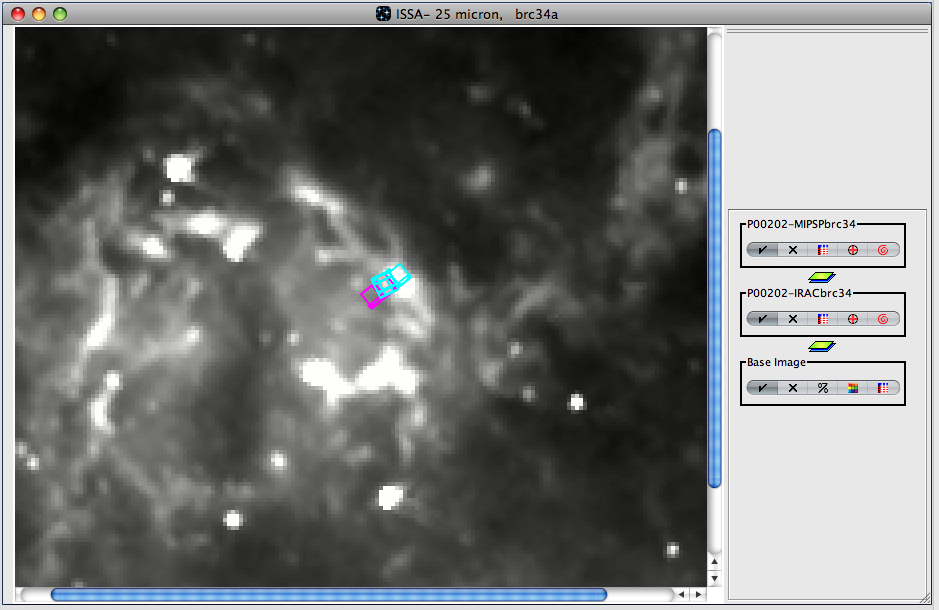 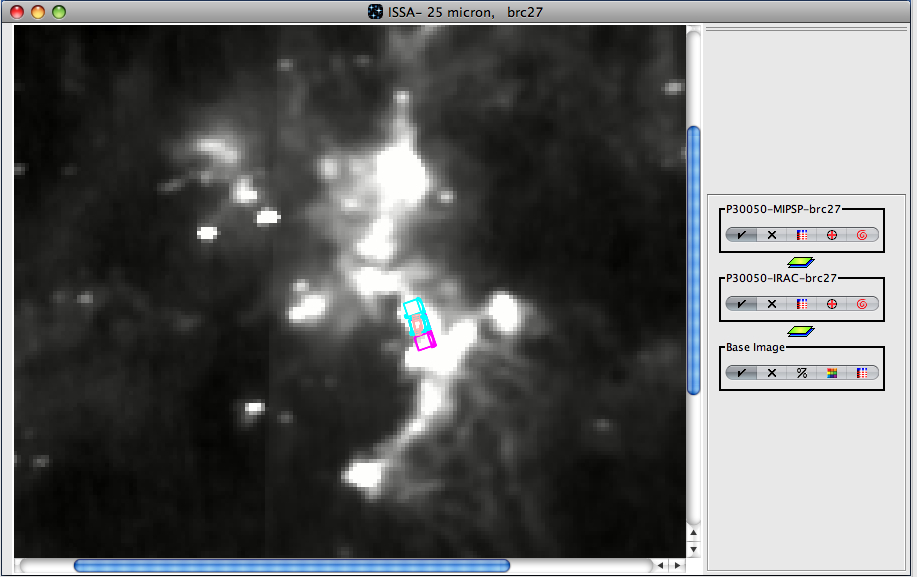 Starting with a general introduction to the physical properties of light, students and teachers will collaborate to synthesize observations across the spectrum. They will compare images obtained by IRAC, MIPS and IRAS to learn about spatial resolution. Evidence will be presented to help students understand how the universe is changing, how stars and planets are forming, and how stars evolve from birth to eventual death. Combining images at different wavelengths, students will be able to produce false-color images that enhance the features of young stellar objects and the ISM composition and structures.

A key initiative in science education is authentic research. Using archival Spitzer data in this project allows our students the experience to assume an active role in the process of project development, teamwork, data collection and analysis, interpretation of results, and formal scientific presentations. They will learn about the instrumentation used in infrared astronomy and the necessity of space-based telescopes. Students and teachers will use spreadsheet and graphing programs to generate color-color plots and color-magnitude diagrams to determine stellar properties. These activities will be age-appropriate and will be shared with other teachers through educational presentations at state, regional and national conferences.

Communication is an important tool in science education. Modeling the collaboration of scientists across the world, students will use the CoolWiki to post their queries and hold on-line discussions about their analysis methods and subsequent results. The CoolWiki is designed to provide a place for teachers, students, and scientists to interact and share the materials they've developed, work on new materials, and collaborate on current projects. The wiki also provides a resource for other teachers to learn how to use the materials we've developed. The wiki is a dynamic place, constantly changing and growing. (need to develop this thought further...)

Team Spitzer at Breck School Similar to previous NITARP/Spitzer projects, a small cadre of Breck School juniors and seniors will work together on this BRC project. Beginning with short tutorials on the general principles of star formation, scientific articles will be read and discussed in weekly "brown-bag discussions." Once the students feel comfortable with the material, the team will be divided into pairs to work cooperatively on the data analysis.

The Pine Ridge Astronomy Team has a history of participation in big projects; our first project was with the Lunar Propector in 1998. Fortuitously, as one project winds down, another comes along to replace it. Even when we do not have an organized campaign, the sky always presents something different for us to examine. The team meets during Wednesday lunchtime meetings. Team members organize Night Labs and Morning Labs to take advantage of good viewing opportunities as they arise during the school year. They also participate in community outreach activities; science night at local elementary schools, Relay for Life, and other local events. Currently, students are exploring web sites and reading articles in preparation for their Spitzer work and are anxious to get started!