Starting the conversation, here is what I sent out Friday about BRC 27.

Each SED is unique, which should mean that there are no duplications: in addition:

Does anybody else have an opinion on any of this?

Clarification on the referenced excel file that I sent out on Friday;

Column B: Since one of our tasks was to determine which of these objects have been previously identified, I went to Harvard's site for Simbad

(be sure you select the Aladin applet for the US, or it will take you to France)

For each of the candidates, I looked to see if there was any kind of identification. (You will notice that so many things are labeled, it's actually surprising to find an object that does not have one) Be sure to scroll down the the bottom of the screen to see if they have actual names; many of them are labeled Ogura.

If it says YSO, it was labeled as such on Simbad, which means somebody identified it at some point in the past... Query: That means we are confirming it?

Column I: anything coded yellow is something I thought was a star before I started digging. What I based that on was whether or not we had a V magnitude farther over on the table (which just happens to also be column V). I revised those opinions based on what I found in Simbad and what is in column J.

Column J: Gator DSS & 2MASS/ This brought up 5 images from DSS (information at the bottom of the column) and JHK, so I was comparing the way each object looked for the different bands.

Going through it one more time, some of my thoughts have changed, and so has the file, so it is posted above.

Today's examination has led me to the following issues:

I did not copy in all of the subsequent mails from me, just the important bits

OK... before I start reading your mails from the last few days (which may take me a bit), let me return to the 'big picture' for a bit. Whenever tackling a big problem, I like to review both "What do we know" and "What are we trying to find". If this email is useful, I can copy this into the Wiki later.

Remember the first page of the attached? This is a Venn diagram I made for you on Friday of your visit that was meant to represent the relationship among all the various source lists we were considering. At that point in the process, we had already consolidated things into:

out of those sets, our scientific goals mean that we are aiming for a discussion of:

The first page in the attached was even trying to correctly represent the relative sizes of the circles in that "all bright enough sources" ought to be darn close to "sources in my catalog" and that there will be some "sources in this general direction..." not covered by the maps and some of those without IR excesses.

OK, so NOW you are going back to revisit the list of "Sources in this general direction studied by anyone else, ever" because even during your visit, we had identified some issues with that list.

On the second page of the attached, I tried to spatially represent the concepts behind what we're doing now, but I admit the circles are not as carefully constructed/laid out as the first page!

Each of these 5 papers (Ogura et al 2002, Gregorio Hetem et al. 2009, Chauhan et al 2009, Shevchenki et al 1999 and Wiramihardja et al 1986) looked in the direction of BRC27. Surely, then, they saw some of the same sources as each other, and as what we are seeing. For example, the Gregorio-Hetem survey covered a HUGE area, and we care only about a part of it. Ogura saw some of the same sources that Gregorio-Hetem did, but not all of them -- they were not covering the same areas, but even within the same area, they did not see the same sources, because one survey was x-ray driven, and one was Halpha driven. They *will* see different sources, because each survey is not infinitely deep -- the sensitivity of the surveys is limited, and as such will not see every source in this direction. Same for each other pair of papers, and our survey.

The goal here is to construct a list that is as clean as possible for each of the objects that these other folks studied, identifying which objects are truly the same between surveys, and identifying which of these objects are ones that those authors thought were young stars. We also want to carry along each of the relevant bits of information that these other authors provided -- you already know that the SED is a lot easier to identify as clearly a young object or a contaminant if there is optical data, so if the other authors reported any optical measurements, we should keep track of those and tie them to the correct object in our analysis. We should also make note of any spectral types or other relevant information. The "money question" (page 3 of the attached) is thus:

and then, the next step is

This would be an easy task if:

We've already talked above about how we are not guaranteed a match between surveys, because stars are different brightnesses at different bands, and because the surveys have limited sensitivity.

You know from staring at the images that there are plenty of sources that are very close together. Even among just the YSO candidates, some are very close to each other, closer than 5 arcseconds.

If we had fabulous coordinates for everything, we could let the computer match them all up and not worry about it. But we don't. And it's not just a matter of precessing the B1950 ones to J2000 ones either - there are inherent errors in those old coordinates which will not necessarily smoothly map into a clean match to other objects.

If we had images, we could line them up by eye and identify the same objects in each frame. I don't necessarily mean "line them up in ds9" since we don't have any fits files. I mean, by comparison between images they publish and images to which you have access (IRAC, 2MASS, POSS), you can identify the objects. This is what we are going to have to retreat to, in the tough cases.

Here are some notes on these 5 papers, in no particular order:

For each of these 5 papers, we obtained a machine-readable (read as "plain text file that the computer can parse into individual numbers rather than images of numbers") version of the relevant data tables. This was either:

These tables are at the bottom of this page here: http://coolwiki.ipac.caltech.edu/index.php/BRC_Spring_work Look down under "Literature known YSOs" and then under "These papers in order of priority" and then each paper's listing has a link to files, e.g., "File:Chauhan-table3.txt".

What Diane did on my advice (see the YouTube video on that page) SHOULD work in MOST cases but did not work in every case; more on this momentarily. What she did was :

Then we had 5 lists of UPDATED, HIGH QUALITY coordinates, one per paper, and we let the computer run through the list, finding the matches between papers. I then generated one file that purported to have one line per literature object, with all the relevant data on that line. But we were able to identify problems with this, in that a few sources during this process were tied to the same object, or identified in other ways as duplicates or incorrect matches.

What I recommended before that you (plural) do to get updated coordinates for targets works ON THE ASSUMPTION THAT THERE ARE NOT "TOO MANY" SOURCES NEARBY, AND THAT THE PRIOR SURVEYS, BEING SHALLOW, ARE MOST LIKELY TO MATCH TO THE BRIGHT 2MASS SOURCE. As I say, this should work in MOST cases but not ALL of them. In some cases, two distinct sources reported, e.g., two sources in Ogura were matched to the same 2MASS source during this process, and thus matched to the same IRAC source when we let the computer merge the lists.

To untangle this, we need to go back, possibly just to the duplicate sources, possibly through all of them if you can't identify with certainty which are the duplicates, and make really sure we have obtained the best possible coordinates. If the original authors are reporting more than one source within one paper, we should not consolidate them into one unless we are REALLY sure that the original authors were wrong. (This does happen; see my North American Nebula paper for examples.) Within each paper, this is what I would do:

Then I (or you) can take the updated high-precision lists of coordinates, merge them together, and come up with a new-and-improved list of all the previously identified objects in this region, one line per object with all the relevant information.

Then we can compare this list to our detections in IRAC. There will be some with IR excesses, and some without IR excesses.

Does this all make more sense?

Bits from other mails

Diane asked, "Are we the first to ever do SED's on these objects?  (If so, that's pretty exciting, isn't it?)"

We're the first ones to make SEDs involving the IR for ANY of these. I don't know if Chauhan actually made SEDs or just plots, and certainly they did not do 24 um. So we're unambiguously the only ones using 24 um.

This is why it's so important to really make sure that we understand which ones are in the literature. We don't want to assert that we have found new YSOs, only to have someone at the AAS meeting or someone in the journal article review process to come back and say hey, no, this is NOT a new object, you just screwed up in your literature search.

BE CAREFUL because as we talked about in the Spring, Simbad is not complete nor necessarily accurate. It's good for doing an initial search or for getting pointers to the papers, but at the end of the day, you always have to go back to the original papers, and do the checks that I blathered on about in my earlier mail today. You have to compare images, finding charts, original catalogs, not just Simbad.

If it says YSO, someone at some point in Simbad tagged it as a YSO. For reasons known only to them, young stars can also be tagged: X, IR, *, Em*, BD*, red, redextreme, Y*, **, EB, HH, *inCl, *inNeb, *inAssoc, V*, V*?, pMS*, TTau*, Irregular_V*, Orion_V*, FUOr, .... the ones that really get me are YSO != *inNeb != V* != pMS* != TTau* .. there's no real distinction there. For some of the rest, you can understand historical classification, but for the most part, it's just phenomenally unclear, and linked ultimately to the whim of the person entering that particular data table. So do NOT rely on simbad for these kinds of classes either.

Graphical representation of all 5 literature papers, plus ours, in BRC 27. Ogura 8 additionally indicated by large black star, since source density is high right there. 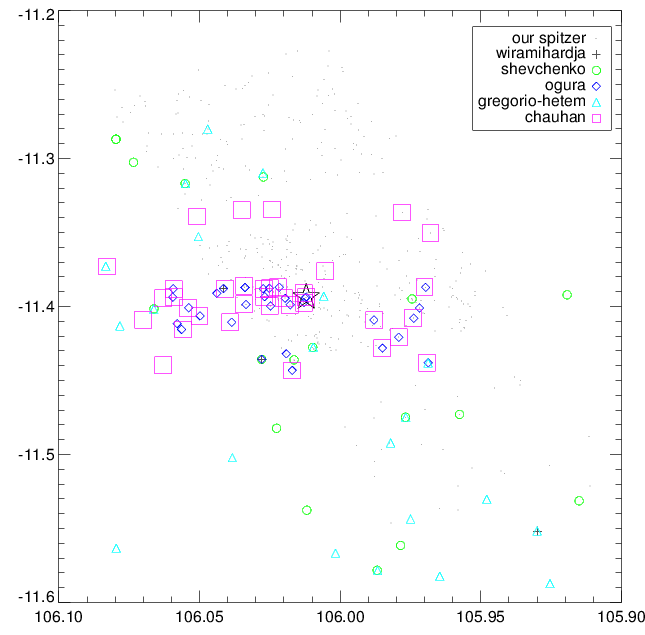