Difference between revisions of "The influence of reddening"

By now, you may have realized that:

In some cases, the influence of reddening can be important, and that is what this page is about. (For still more information, consult your local college astro textbook, or try Wikipedia entry on reddening/extinction)

Reddening is the same phenomenon we observe here on Earth when watching a sunrise or sunset -- the Sun appears redder than usual because the blue (higher energy) light is preferentially scattered by the atmosphere out of the line of sight, leaving mostly red light to reach your eye. In that case, the more junk in the atmosphere (like from a volcano), the more dramatic the reddening. Same thing happens in space, just due to junk inbetween us and the source we're observing.

As you might imagine, this happens rather a lot in star forming regions, because the stars form in cocoons, in clouds of gas and dust. So we do often have to worry about this, formally. However, the influence of reddening is strongest at bluer bands (e.g., U band is very sensitive to it) and becomes less strong the farther into the IR you go -- JHK can suffer some effects, and you kind of have to be behind a brick wall before it matters for IRAC bands. But it can happen.

Effect of Av on SEDs

Remember this YouTube video which has a bunch of blackbody curves for a variety of temperatures corresponding to the effective temperatures (Teff) of a variety of spectral types. It has vertical lines indicating the position of various bandpasses, and the idea is that you can see how the shape of the underlying approximate stellar photosphere changes as the Teff changes, and you can then infer how the ratio between measured fluxes in the various bandpasses might change.

Now, see this YouTube video which now holds the underlying blackbody temperature constant at T~5800K, but now varies the Av. The bandpasses are indicated, though I think the vertical lines are different between this and the prior movie, sorry. Look at the upper right of the plot -- it tells you both the Aj and the Av. Most people think in Av, but my code happens to be written in Aj for no fantastically great reason other than the paper from which I was copying the reddening law (Mathis et al 1990, I am pretty sure) was working in Aj. One thing to note is that Av gets pretty large pretty fast, and Aj doesn't get as large as fast. This is because V-band is more sensitive to reddening than J-band (since Jband is further into the IR).

So, run this through a few times and watch how the SED changes. More reddening pulls down the left (blue) side of the SED really fast. The bluer the band, the faster and stronger the influence of Av; the redder the band, the slower and weaker the influence of Av. Note too that even though I'm still stepping through Aj with the same stepsize (0.2 mags, I think), for large Aj, the rate of change of the SED shape slows. The deep absorption feature that appears comes from the 10 micron silicate absorption - the interstellar medium has a lot of silicates (e.g., beach sand) that have a prominent absorption line at 10 microns, so the more junk there is intercepting the light, the more there is to absorb the light at 10 microns.

If you look at this second movie in comparison to the first movie, you can see that if we just have photometric points for a given object, we can't a priori tell if it is a cooler star, or a hotter star with lots of Av. This is one reason (of many) that we need a follow-up spectrum of our YSO candidates to determine if they are real YSOs, and if so, what spectral type they are, e.g., what is the temperature of the underlying photosphere. Then we can get a better handle on the amount of Av.

In papers like this, you can often see Av vectors indicated in the plots. 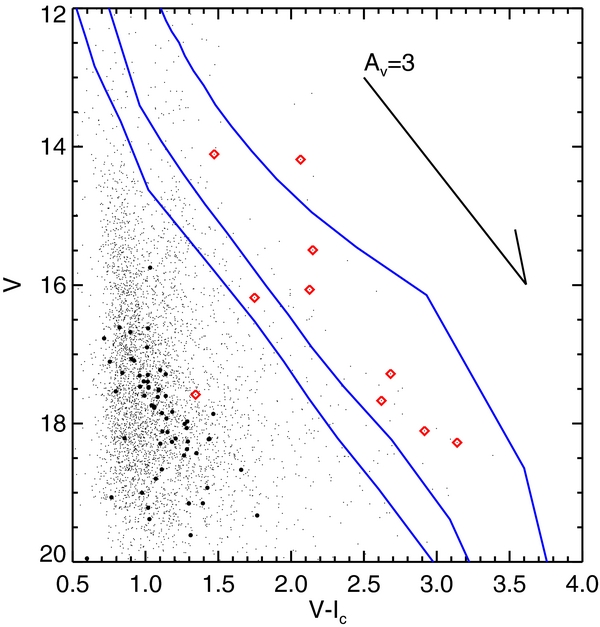 Here is an example of one of the plots from that paper. This is the optical color-magnitude diagram V vs. V-I. The cloud of points mostly concentrated in the lower left is the rest of the objects seen in the field, e.g., likely background objects. The red diamonds are the objects this paper is caring about. The blue lines are isochrones, e.g., lines of constant age, and the reddening vector is indicated with the notation "Av=3". So, the way to read this is the following: these magnitudes/colors as plotted are the magnitudes/colors as observed. The objects we care about are (mostly) about where they should be, e.g., hovering around the blue lines (and therefore inferred to be young). If there is reddening between us and these objects,it will push the points in the direction the arrow is pointing, and if it is as large as three mag, it will push the points as far a the vector indicates.. Once we are able to actually obtain individual estimates of Av for these stars, we can move them in the opposite direction, e.g., backwards along that vector. Also note that the reddening vector is more or less parallel to the isochrones. So, any age estimate you might infer from this plot is relatively insensitive to the size of the Av. But Av has a strong influence on the mass you might infer. This is, in fact, consistent with what we learned above watching the movies of the SEDs - lots of reddening makes a given set of points from a bright star look like it comes from a much lower mass star without reddening. 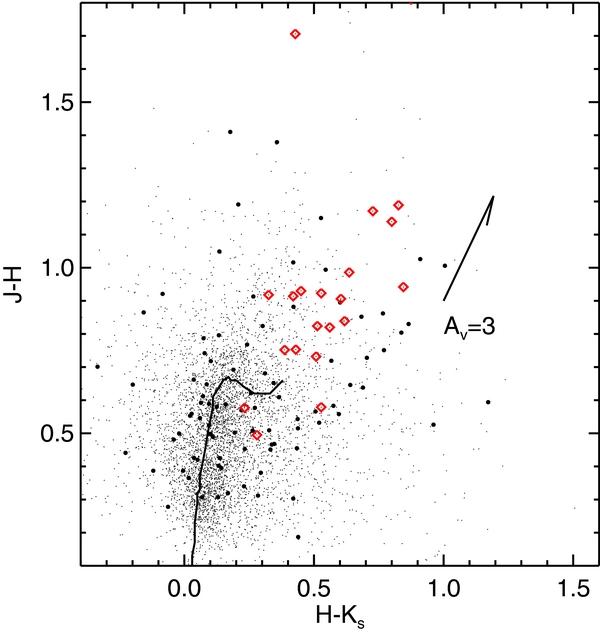 Here is a near-IR color-color diagram, J-H vs. H-K, for the same sample of stars. Here again the cloud of black points are the background things we don't really care about except for context. The red diamonds are again the objects this paper is caring about. The black line is the relation one would expect for unreddened, normal stars. Knowing this, you can look at the distribution of the cloud of points, and find that it does in fact cluster about that line. The larger more dispersed halo of points closer to the lower left of the plot are either wrong measurements or not stars. The reddening vector is also indicated here in the upper right. Things to notice... The reddening vector is pointing in a totally different direction than the last plot. That is because this is a color-color diagram (not a color-mag diagram) and because of the bands we've picked. The reddening vector is a totally different length, even though it is still Av=3. That's because this is the near-IR and the influence of reddening at these near-IR bands is less extreme than it is in the optical. So, the way to read this is the following: these magnitudes/colors as plotted are the magnitudes/colors as observed. If these young stars did not in fact have a lot of reddening between us and them, they would appear clustered around that black line. But they don't; if you slide them all back along the vector (opposite to the direction the arrow is pointing) until they intersect the black line, you can get a guesstimate of the amount of Av. Most of the red diamonds are in the "right place" to do that -- the ones that have the bluest colors of the set are likely the higher mass stars, with Av<3. For the rest of them, though, do we slide them back until they intercept the black line the first time (--> lower mass stars, less Av), or the second (--> higher mass stars, more Av)? We need a spectrum to be able to tell. Also, for some of these objects, some of the excess emission at K comes from circumstellar dust, not just stuff between us and the object. So just sliding the object back along the Av vector until you hit the black line may not be the right thing to do. 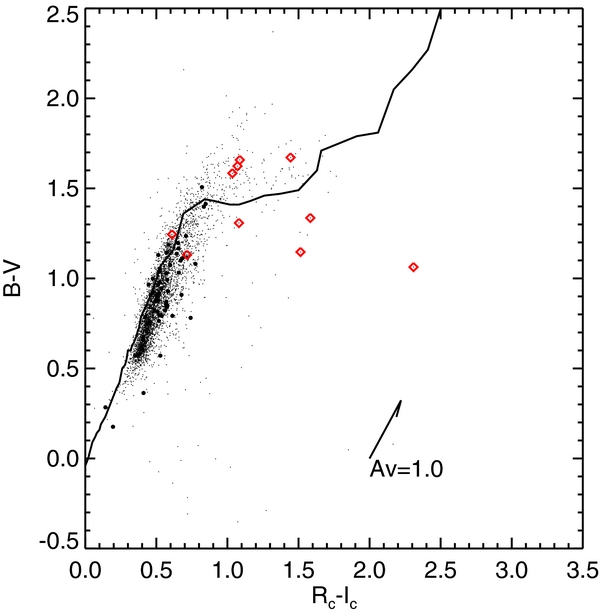 OK, last plot. This one is B-V vs. R-I. Stop reading for a moment and think about what you know so far, and what you expect to happen as a result of the reddening, given that there is B band involved.

This plot has a lot of the same notation as the other plots. Here we have the cloud of black points we don't care about, and the red diamonds we do care about. Here again the black line is the relationship between these colors that one would expect for plain stars. The cloud of points does not quite line up on the left; truth be told, that is an indication that the calibration of our points is just a little off. Note that the reddening vector here is Av=1, not 3. The bluer you are, the stronger the influence of Av. See the smear of the main bulk of the black points up in the same direction of the reddening vector? That's the influence of interstellar reddening. Two if the red diamonds are in the main distribution of points. That could be their real location, or they could be pushed along the reddening vector from their 'true' position. Four of them are clearly reddened from the main distribution of points. Four of them seem like something must be wrong, as no amount of Av will ever move them back to the cloud of points or the black line. In those cases, there is an ultraviolet excess, or "more blue than you expect", because the stars are likely actively accreting matter.

What do you think the size of an Av=3 vector will be in an IRAC color-color diagram?