There is LOTS more information on young stars in the studying young stars section of the Advanced Research Tools. This page has a high-level summary of star formation. 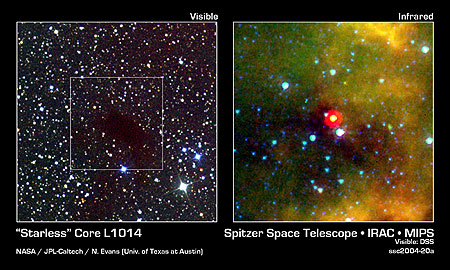 Here is an image of an object called L1014. This object used to be known as a "starless core." On the left is a picture in visible light, and you can see why people thought it was starless. On the right is a picture from Spitzer clearly revealing a baby star inside (it's the bright red thing)!

When the protostar enters the next stage, labeled in the figure as the T Tauri stage, it’s still gaining mass and contracting slowly because material is still falling onto it, but it begins to eject gas in two giant gas jets, called bipolar flows. These jets and stellar winds eventually sweep away the envelope of gas still surrounding the protostar. In the surrounding disk protoplanets are beginning to form. Astronomers call this phase the T Tauri phase, but some objects with jets are also "Class I"; T Tauris are also either "Class II" (for ones with thick disks) or "Class III" (for ones with thinner disks).

Leftover material in the disk surrounding the star clumps together and undergoes many collisions until most of the material has been swept up by objects orbiting the star, such as planets, asteroids and comets.

The star’s life so far has been governed by the continuous inward pressure of gravity. The gravitational pressure keeps compressing the gas into a smaller and smaller volume, making it hotter and hotter in the core. As soon as the temperature in the core of the protostar becomes great enough, about 1,000,000 K, nuclear fusion begins. Nuclear fusion is the process in which small atomic nuclei combine to make larger atomic nuclei, releasing lots of energy. Inside the star, the gravitational pressure eventually pushes 4 protons and 2 electrons so close together that they fuse together to make helium. When this nuclear fusion begins, finally the star has a way to "fight back" against gravity. So much energy is released in this reaction that it enables the star to "push back" with an outward radiation pressure that balances the inward push of gravity. The protostar is now a full-fledged star, fusing hydrogen into helium in its core. (f) The star will stay the same size until it runs out of nuclear fuel in the core (all of the hydrogen has been converted into helium). Then, the pressure from gravity takes over again, pushing in on the star.

Star formation can be triggered by the collapse of large clouds of gas and dust. Sometimes the clouds collapse all by themselves (due to gravitational forces within the cloud) and sometimes they collapse because they’ve been pushed by the radiation and winds from stars that have already been formed. This seems to be the reason behind the star formation in IC 2118. It seems to have been triggered by some combination of forces from the main Orion Nebula Cluster (the fuzzy patch in the sword) and Rigel.