How does the Spitzer Telescope work?

The Spitzer Space Telescope (formerly SIRTF, the Space Infrared Telescope Facility) is a space telescope designed to take pictures of the universe at wavelengths beyond what the human eye can see. Remember that the human eye can only see visible wavelengths (between 400-700 nanometers)? Well, Spitzer is designed to take both images and spectra by detecting infrared (IR) wavelengths -- this kind of light has longer wavelengths than visible light, beyond 700 nm). Any warm object in space radiates IR energy (infrared energy, which we sense as heat). In fact, "warm" really means any object above absolute zero (0 Kelvin or –273C), because any object above absolute zero releases some wavelength of IR energy. The Spitzer Space Telescope is designed to detect infrared (IR) energy between wavelengths of 3 and 180 microns (1 micron (µm) is one-millionth of a meter or Failed to parse (MathML with SVG or PNG fallback (recommended for modern browsers and accessibility tools): Invalid response ("Math extension cannot connect to Restbase.") from server "https://en.wikipedia.org/api/rest_v1/":): {\displaystyle 10^{-6}} meters. In other words, Spitzer is designed to detect light with really long wavelengths, so long that humans can only detect those wavelengths as heat. (Can you name other wavelengths longer than IR? Really long wavelengths include radio waves and microwaves. And, in case you were wondering, shorter wavelengths include UV, x-rays, and gamma rays.) 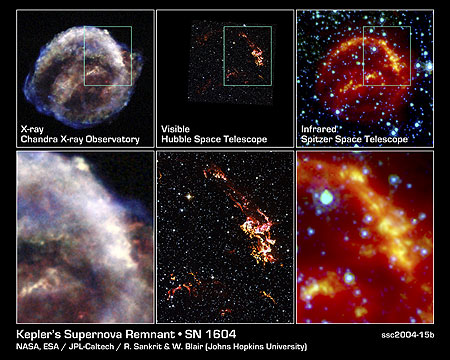 Spitzer is one of four very important telescopes designed to study the universe from space. These are called NASA’s Great Observatories. Perhaps the most famous of these is the Hubble Space Telescope. The other telescopes in the Great Observatories Program are the Compton Gamma Ray Observatory (CGRO) and the Chandra X-Ray Observatory (CXO). Each telescope observes different wavelengths: Hubble observes visible radiation, Chandra observes x-ray radiation and Compton observes gamma ray radiation. Spitzer is designed to observe IR radiation (sometimes called IR energy or simply, heat). Notice in the picture (right) how different the same object can appear in the x-ray, visible and IR wavelengths.

Unfortunately for earthbound IR astronomers, most of this IR radiation is absorbed by the Earth's atmosphere. Thus IR radiation cannot be observed from the ground, so the solution decided on was to launch a satellite into space. Spitzer was the last of the Great Observatories to be launched. On August 25th, 2003, it was launched into space by a Delta II rocket from Cape Canaveral, Florida.

Spitzer is a relatively small telescope (its diameter is only 0.85 meters) but it is specially designed to detect IR radiation. First, it has three science instruments that are cooled with liquid helium (this is called cryogenically cooled). Second, it can take IR images with a CCD camera or take spectra with a spectroscope. Lastly, it is not in orbit around Earth- it actually follows Earth’s orbit around the Sun, and does not orbit Earth. (Movie about the Earth-trailing orbit.) This was done because the instrument must be kept very cold, so it was best to keep it further away from Earth. If you are wondering why the telescope must be kept so cold it is because the telescope is trying to observe heat! If the telescope was warmer, the extra heat would overwhelm the faint IR signals from space (this is sometimes called heat interference or noise...it would be sort of like trying to observe in visible wavelengths with a telescope made out of fluorescent light tubes.) The telescope must also be protected from the heat of the Sun, so it carries a special solar shield and always points away from the Sun.

With all of these specialized instruments on board, the Spitzer telescope gives us a unique picture that our eyes cannot see. For example, it can detect IR light through vast, dense clouds of gas and dust which block visual light. Inside of these dense clouds of gas there can be new stars forming or newly forming planetary systems. Spitzer can look at really dim, smaller stars or at giant molecular clouds. It can help scientists identify which molecules are present in the clouds because certain molecules have unique signatures in the infrared. One of the important molecules that Spitzer can identify is called a PAH (polycyclic aromatic hydrocarbon). PAHs are one of the important molecules found in the interstellar medium (ISM). For more information, check out Studying Polycyclic Aromatic Hydrocarbons.

I'm ready to go on to More information on Spitzer operations