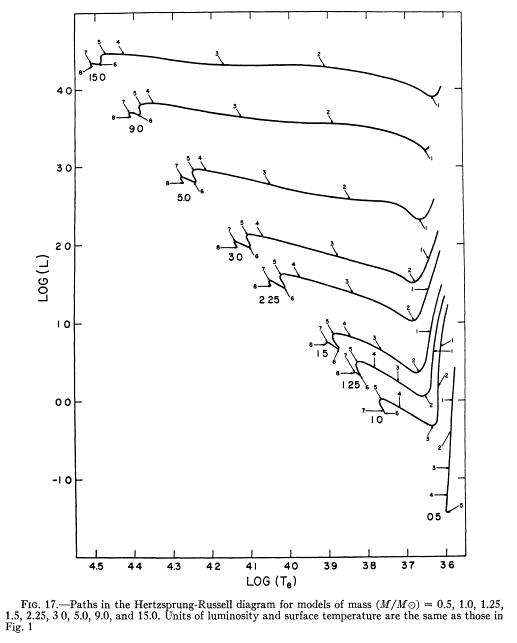 This figure comes from Iben, 1965, ApJ, 141, 993, which is an old paper, but still presents the "big picture" of pre-main-sequence evolution as succinctly as anything else I can find.

This is a HR (Hertsprung-Russell) diagram, so luminosity is on the y-axis and temperature is on the x-axis, where large T's are on the LEFT. You are used to seeing these for mostly main sequence (MS) stars, which is where these tracks END. Stars start at the upper right here. Post-main sequence evolution will carry these stars back to the upper right of the diagram and then around to the upper left and then down to white dwarfs in the (approx.) lower left. For more about post-MS evolution, see, e.g., http://lcogt.net/siab/. This page, however, is about PRE-main sequence evolution.

The numbers at the MS end of the tracks correspond to the mass of the stars modeled here. The 15 Msun object moves right to left on kind of a straight line, and the 0.5 Msun object moves pretty much straight down in the diagram. All of the tracks stop as soon as H starts burning, so none of these objects are yet burning H. They can (and do!) burn Li and D during these early phases, because Li and D are far easier to pull apart than it is to squish 2 Hs and 2 neutrons together to make He.

Each of the numbers on the tracks themselves corresponds to an event along the star's evolution, but, e.g., not all the 1's happen at the same time; they correspond instead to (roughly) the same kind of event in each star's life. (They actually correspond to times given in an accompanying table -- see the paper!)

The straight vertical parts of the tracks are called Hayashi tracks (named for historical reasons), and correspond to the entire star being convective. When it starts to develop a radiative core, since the structure changes, the way that energy makes it out of the star changes, so the properties of the star as observed also change. This is why the tracks dip in L and then veer left in the diagram. Note that low-mass stars never make that transition. Extremely low-mass objects never ignite H, so they spend their whole lives contracting on Hayashi tracks (Jupiter does). But objects massive enough to actually burn H at some point (e.g., stars!) but "small enough" masses still spend their Pre-MS lives completely convective. Really massive objects spend very little time completely convective.

After the dip in L and veer left (hotter), the star is on a Henyey track (also named for historical reasons). The increase in L corresponds to a structural change, e.g., an increase in size of the radiative core. The additional dip as it's approaching the MS corresponds to more structural changes, e.g. a temporarily convective core as it is getting ready to burn H. I think some of the structure too comes from burning D and Li, but I've forgotten now if Iben has this in his models, and I can't find it quickly in the paper nor my textbooks.

Note that the youngest stars are red, and the oldest ones are blue, but that is in a relative sense. Young low mass stars will never be as blue as the MS high mass stars, but their end point is (slightly) bluer than where they started. Lower mass stars don't change temperature that much on their approach to the MS.

Note that the timescales for this are wildly different. According to this paper's original calculations:

There are more recent calculations of pre-MS tracks. Some of the most famous are:

Things that make this modelling hard -- getting all of these right (and none of them are static in time for the timescales we are talking about):

By no means an exhaustive collection, just what I've stumbled across...