OK, so at the AAS we talked about LDN 1548 as a viable option. It had, we thought, good potential for yielding new young stars, it was (in projected distance) near Taurus, it has the potential for being actually related to the Taurus Molecular Cloud (and thus of scientific interest). It also has SDSS data in the archive, so that's a strong plus -- more data will help us weed out the contaminants.

I just went and got the whole WISE tile. It's REALLY diffuse star formation, MUCH worse than I remembered. I mean, bad enough that I went and checked the coordinates. More than once. This is what I see. There is not a lot here, and there is going to be a TON of contamination:

I've gone back to my Taurus collaborators to figure out why we thought there was something interesting there.

But that probably drops us back at the beginning in terms of target selection, sigh. Sorry. But, this is real science, and I (honest-to-God) do NOT know the answer before we get into this. This is the real thing, folks.

The approach we talked about will be the same; we just need to find a better target.

I decided to go resurrect some of the other regions that were under consideration. They were: 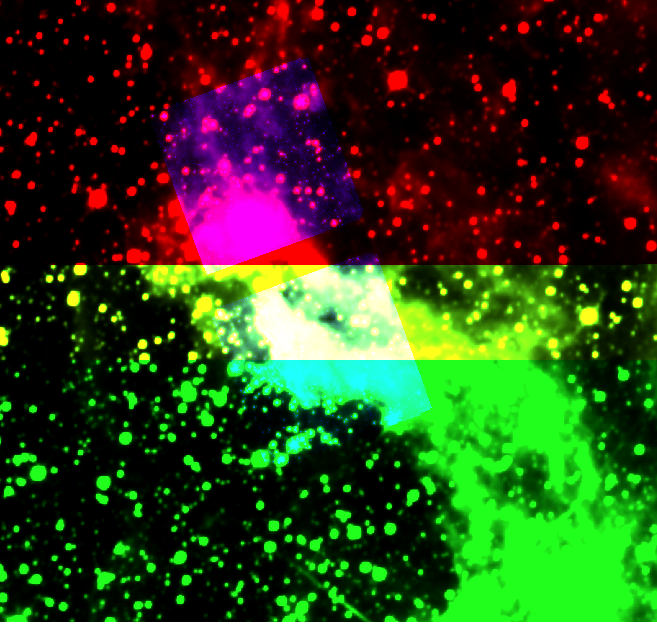 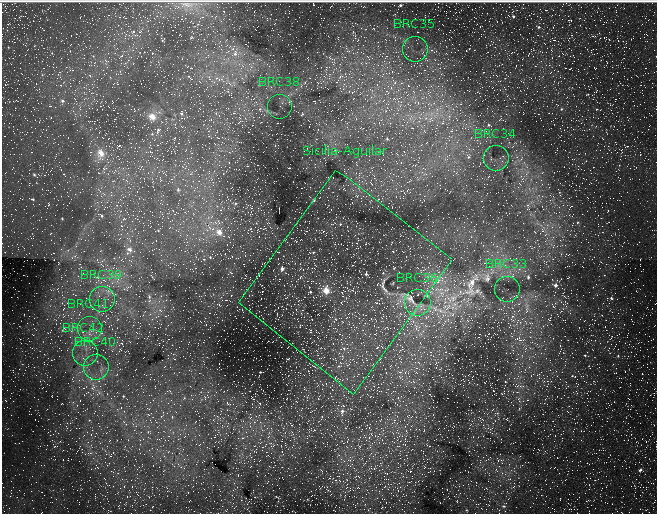 So, from where I sit, at the moment anyway, I think maybe following up the BRCs (WISE mostly, leveraging off Spitzer from last year's team), or LDN 1340 (we'd do Spitzer+WISE).

Additional contributions from the peanut gallery -

So, we are trying to decide between LDN 1340 and following up on the work from last year's NITARP team, BRC 27+34, with an option to include another BRC if we blow through them fast.

ACTION ITEMS for next week: start a lit search for both these regions. see if you can add to the pros/cons list above. look at the objects as they appear in other bands (e.g., POSS from Skyview). Post a summary of what you find below ("Stuff in prep for 1/27 telecon"). Add your signature if the context seems appropriate, so we know who said what and when!

UPDATED via email Fri, 20 Jan 2012 20:06:58 (PST), from Luisa: the decision is kind of made for us! The LDN 1340 data is being done already. sigh. SOooooo unless there are major objections, i think that we should go for the BRCs. i think they will be useful, fun, and interesting! if what was appealing to you about LDN 1340 was that you would work with spitzer data, we can do one of the other BRC footprints in addition to the wise environment of BRC 34 and BRC 27.

i will leave the stuff i put on the wiki there for now, except obviously the column marked "ldn 1340" isn't relevant anymore. it does still summarize the wide ranging conversation of today.

So, *revised* ACTION ITEMS for next week:

Post a summary of anything relevant you find below ("Stuff in prep for 1/27 telecon"). Add your signature if the context seems appropriate, so we know who said what and when!

AH ! Good, so it *IS* really done -- that paper analyzes the Spitzer data. Phew. it always makes me feel better when the notes from a year ago are actually correct. ;) (i couldn't find that paper when i did a quick search the other day -- just shows you the fallibility of these various paper archives, and how you need to search in multiple ways to be sure you have all or most of the relevant papers!) --Rebull 15:19, 23 January 2012 (PST)

I find two hits related to BRC 38, Search for triggered star formation in the unique bright rimmed cloud 4, Garmire & Gordon which appears to be a Chandra Proposal, they say BRC 38 = IC 1396N for what its worth. There is also the radiotelescope H{2}O maser emission from bright rimmed clouds in the northern hemisphere, Valdettaro, R.; Palla, F.; Brand, J.; Cesaroni, R. I have not read either yet.--Peggy Piper 08:13, 26 January 2012 (PST)

Yep, you're right -- BRC 38 is in the IC1396/Trumpler 37 complex -- see my updated POSS figure above. There are a ridiculous number of these BRC guys in this complex; another approach that could be taken by someone approaching the archive looking for a project is to do all of the BRCs in this IC1396/Trumpler 37 complex, using WISE to help tie them together. I think this is a bigger project than we can realistically do, though. --Rebull 09:10, 26 January 2012 (PST)

I looked through ADS, and found no references that seemed relevant to either BRC 3 or SFO 3. Has anyone else been looking in ADS? My confidence level for researching the literature isn't great right now, so I'm sort of trying to gauge my abilities. If someone else has found literature on BRC 3 in ADS, please post what you found. Lauren Wed. 25th January 5 PM PST at 5 PM PST.

the GTO programs from which we pulled IRAC data last time looked at the following BRCs, and there may be more; i didn't do a comprehensive search yet to look for more from these guys (this is original gto program 202 and a cy 3 GTO program 30050). (NB on coordinates: I didn't get these coordinates from the original BRC/SFO paper ... I got them from the targets of the IRAC observations. So I cheated a little.) : brc# 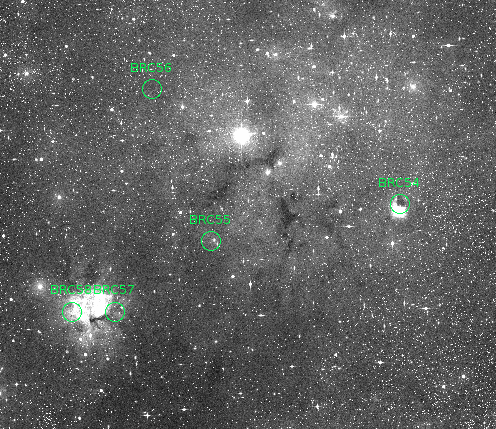 So, one approach we could take is all of the BRCs in a region (e.g., ic1396/Tr37 region, or Gum nebula region), but this seems like biting off more than we can chew.

We could do brc 27+24 plus one other, i think, if y'all are motivated. Just need to pick the 3rd. Could be another one in the Tr37 region, or one of the ones tagged "maybe a good target" above.

We are doing the environs of BRC 27 and 34 with WISE. Do we need a 3rd region to chew on this year? It would probably mean getting into Spitzer data reduction, which is a little different than what we'd need for WISE. If we want to do a 3rd, we need to decide among the winnowed BRC fields above.

We also need to start making forward motion on the proposal, which means more literature searching and reading (using ADS and SIMBAD). There is also interest in finding out, e.g., if these BRCs are also within Lynds clouds (they very well might be). This means searching in SIMBAD.

"These observations confirm the presence of dense gas towards IRAS point sources detected at submillimetre wavelengths. Derived physical properties allow us to refine the sample of bright-rimmed clouds into those likely to be sites of star formation, triggered via the process of radiatively driven implosion. An investigation of the physical properties of our sources shows that triggered sources are host to greater turbulent velocity dispersions, likely indicative of shock motions within the cloud material. These may be attributed to the passage of triggered shocks or simply the association of outflow activity with the sources."

Promised summary of discussion, assignments, plus tips and hints.

-> we will say in the proposal we will look for new young stars using WISE in the environment of these three BRCs: 27, 34, and 38. the Spitzer data for 27+34 was done by last year's NITARP team the Spitzer data for 38 is in the literature ... and the words we'll use is that we will assess the data reduction in the literature and redo it if necessary. in practice, this means when we get to june/july, if you want to get into the spitzer photometry, we will cover it during our summer visit. or if the group thinks they have plenty to do with just the WISE stuff, that's ok too.

OK, so our thee targets, with positions, are:

Continued on C-WAYS Proposal page, since now the next steps are proposal writing! :)